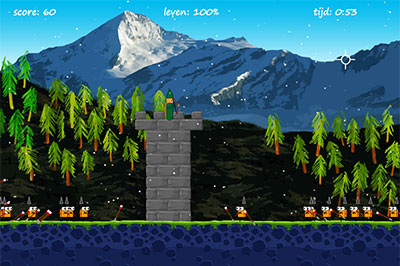 The enemy tries to reach you and destroy your tower. The more time passes, the faster the spearman come and the harder it gets to shoot them. It is a fairly simple game but I enjoyed making it. I also found a script for making particles move with a sinus movement and used this for creating the snowparticles flying around the scene.

Adobe Flash has pasted its peak and is now dead, so no more actionscript for me, but making this game has given me a lot of insights in game development.